Litter in our waterways

Litter is a serious pollution issue that affects our waterways, coastline and ocean – impacting on wildlife, human health and the marine environment. 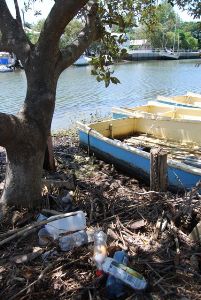 A community survey conducted by Healthy Waterways in March 2011 revealed most South East Queensland residents consider rubbish and litter as the most important factor that negatively impacts waterway health.

In 2005, it was estimated that 7 billion tonnes of litter and waste debris enters the world’s oceans annually and most of this comes from the land. Plastics, particularly packaging, create up to 99% of this debris. Rivers, streams and stormwater drains transport litter hundreds of kilometres to the ocean where currents and winds then carry them all over the world.

In 1997, Charles Moore and his crew discovered what is now known as the Great Pacific Garbage Patch. This concentrated area of marine debris located in the North Pacific Ocean is a result of currents from the North Pacific Gyre. The patch is estimated to be between the size of Victoria and Queensland.

To address the issue of waterway litter in SEQ, Healthy Waterways Clean Up Program collects litter from the waterways while our region wide Clean Up Campaign and aims to raise public awareness and the Plastic Pollution Revolution encourages a commitment from community members to reduce their plastic footprint.

Litter and marine debris in waterways pose a major threat to marine life. The main impacts on our wildlife include: