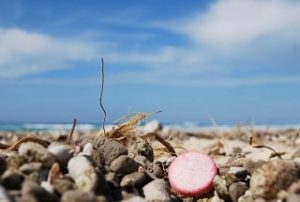 Litter is a serious pollution issue that affects our waterways, coastline and ocean – impacting not just on wildlife and the marine environment but on human health and our economy as well. It has been estimated that around 7 million tonnes of litter enter the world’s oceans each year.*

Queensland has the highest amount of litter of all mainland states in Australia. When litter is dropped on land, rain and flood water carry it into stormwater drains which empty into our creeks, rivers, and eventually oceans.

This litter can accumulate in “gyres” – massive, slow rotating whirlpools. The largest and most studied of these gyres is the Great Pacific Garbage Patch between Hawaii and North America.

Marine wildlife ingest pollutants causing dehydration, damage to internal organs or starvation. Most plastic never biodegrades, it breaks down into smaller pieces known as micro plastics. These plastics consist of toxic chemicals which enter the food chain via marine animals and increase the potential for human health impacts. Up to 30% of turtle deaths in Moreton Bay are caused by the ingestion of litter.

Litter impacts on our economy as well as our environment, by polluting natural areas which support on our tourism and leisure industries. Local governments spend millions of dollars each year on litter collection and illegal dumping cleanups. The impact on our fishing industry includes contaminated catches and damage to boat hulls and propellers.